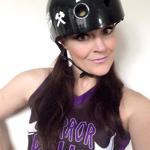 Barb began playing Roller Derby at Hereford Roller Derby in July 2014 and took on the role of Head Coach at Hereford Poison Berries Junior Roller Derby later that same year. Now a competitive level 3 team, The Berries, along with Barb and the rest of the Berries bench crew, have been involved in junior exhibition games at Anarchy 6, MRDA Champs 2017, MEQ 2018 and RDWC 2018.

The highlight of Barb’s Derby career so far was the trip to Philadelphia as Line Up Manager for Team GB Juniors JRDA World Cup 2018 squad. “The whole World Cup trip was made all the more exciting by the fact that 7 of The Berries had made the team and so we were all able to share the experience!”

Barb is currently in her 2nd year as Head of Training and Vice Captain at Hereford Roller Derby who competes in Tier 2 of British Champs. She was until recently also a coach and director for MRDA team Crash Test Brummies.

Barb, a High School teacher, comes from a ‘Derby Family’ with her husband and 2 younger daughters making their national squad and her eldest daughter refereeing the sport. “All being involved in the same sport has kept us really close as family and it’s given us the opportunity to travel together! We also never run out of things to discuss at the dinner table because there is always something ‘Derby’ to talk about! ”